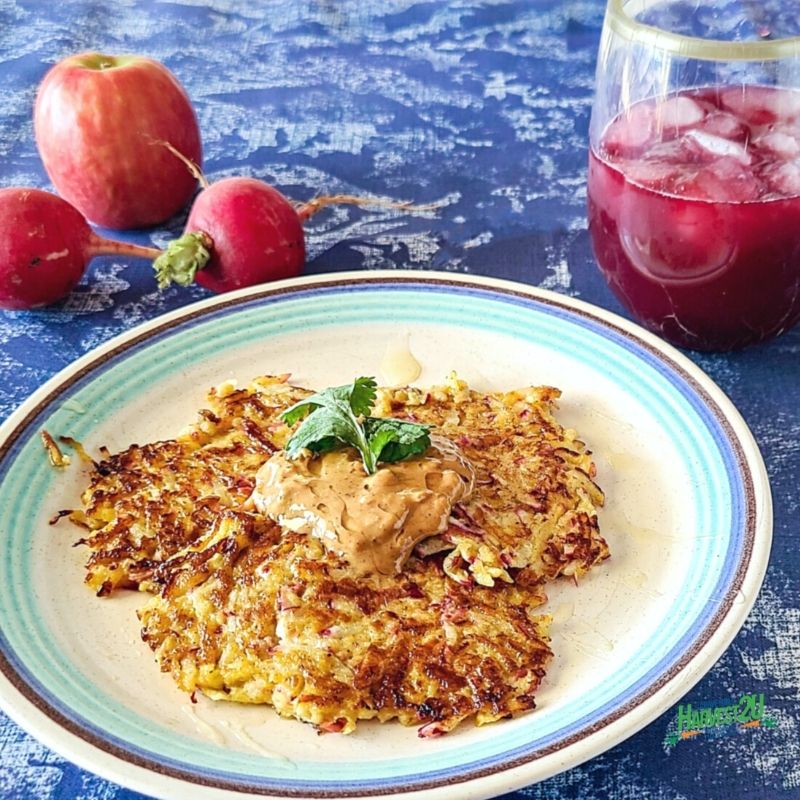 Apple Radish Fritters are naturally sweet instead of the usual savory fritters. Pair them with some peanut butter and a drizzle of maple syrup for a delicious and healthy breakfast. As a bonus, this recipe works even better with those extra-large fibrous radishes that aren’t so great in salads.

This recipe started as the usual Radish Fritters, seasoned with cumin and cilantro. Then I noticed the apples as I pulled the radishes out of the fridge. And a light bulb went off over my head. SWEET instead of savory.

I used my homemade gingerbread spice to flavor them, a blend of cinnamon, ginger, cloves, and a pinch of nutmeg. But, just cinnamon will be equally delicious.

Top them with all-natural (no sugar added) peanut butter and some real maple syrup for some added protein and a touch of sweetness.

To get fritters or hash brown nice and crispy on the outside, you need to squeeze out as much liquid from whatever fruit or vegetable you are using. You can sip on the juice while cooking them up; it’s pretty refreshing and healthy!

It would help if you also got the pan and oil hot, almost to smoking.

And finally, press your fritters together once they are in the pan. The flour and egg make a paste that helps hold the gratings together, but a little pressure will keep them from falling apart when flipping.

Audrey Humaciu is an avid "maker" that believes homemade is better. Check out her blog, That Recipe, and rediscover the simple pleasures of cooking and eating real foods that nourish your body, mind, and spirit. She'll show you how easy it can be.

View all posts by Audrey Humaciu →